Some sites are still distributing old OBSOLETE versions.
If you are using a pre-2009 version of Mpg2Cut2,
I highly recommend that you UPGRADE NOW
to the current Beta version available below.

Aero apparently has *NO SUPPORT* for DirectDraw Overlay.

_ I recommend you turn off Aero mode in Windows (preferred),

For an explanation see :- NY Times ARTICLE ON VISTA COMPATIBILITY 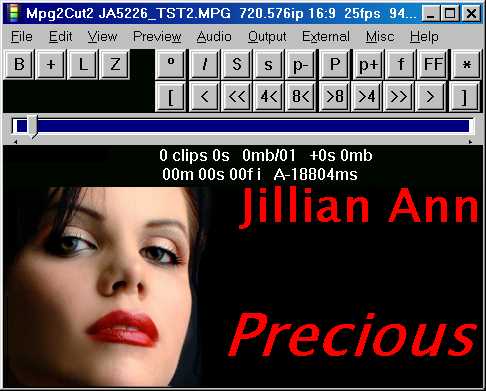 This here is a TEST version:

It is still under development.

This software is covered by the GNU GPL license of the Free Software Foundation.

Meaning you can use it, change it, but DON'T CHARGE FOR IT.


DISCLAIMER: NO LIABILITY FOR ANY PROBLEMS ARISING FROM USE OF THIS SOFTWARE

If you have the Volume Boost set quite HIGH, (1st slider)
but the Limiter set quite LOW, (2nd slider)
then they will be acting AGAINST each other.
This will provide maximum smoothing of volume levels,
but background noises may become annoying.
EG Traffic noise, people breathing, camera whirr, hiss.
So adjust according to your personal taste.

- Warning for Satellite users :-
_The Time Stamp correction option is NOT compatible with Satellite.

The Alpha version has not been tested as much as the Beta version,
but it has various enhancements, as noted below.

If you are planning on using the edited output on a DVD,

OR if you have problems in playback, such as bad audio sync:

then I suggest that you ALSO use one of the following format conversion utilities, which examine an Mpeg stream in detail, and adjust it to meet DVD or SVCD restrictions:

TS-Doctor - for Transport Streams only:

The recommended way to create chapters,
is to save each clip SEPARATELY.
This way each clip becomes a separate chapter.

Hopefully, you won't need the old versions,
because they are all out of date.

But if the latest build has taken away
something you needed,
you can fall back to one of these.

This is distributed in the hope that it will be useful,
but WITHOUT ANY WARRANTY;
without even the implied warranty of MERCHANTABILITY or FITNESS FOR A PARTICULAR PURPOSE.
See the GNU General Public License for more details.